Reports on CPI and PPI (Consumer and Producer Prices Indices) and Industrial Production will be out this week.

Payroll employment grew by much less than expected in December as employers only added 199,000 to payrolls. However, we continue to see signs of labor market tightness, with unemployment dropping to 3.9% and wages rising by a robust 0.6% m/m and 4.7% y/y. The durable rise in wages, as demand for workers far exceeds supply, has added a significant boost to the “sticky” inflation narrative as this week’s upcoming CPI report could show a whopping 7% y/y gain. Moreover, there may yet be room to run on wages.

Entering the new year, 21 states increased their minimum wage by an average of 41 cents, with many states approving incremental minimum wage increases for multiple years ahead. While only a small percentage of all workers earn the minimum wage, these increases have the effect of raising the wage floor for all low-wage employees.

Apart from these minimum wage increases, workers are also set to get some of the largest cost-of-living adjustments seen in decades. Just as Social Security payments are adjusted annually for cost-of-living changes, many private employers build similar adjustments into their compensation structures. Further, it seems most employers implement these changes in January, as reflected by the non-seasonally-adjusted distribution of monthly wage increases from 2010 to 2019.

As we turn to next month’s Jobs report, we may see a larger spike in wages as the increase in minimum wages and cost-of-living adjustments look set to far exceed the historical seasonal patterns. 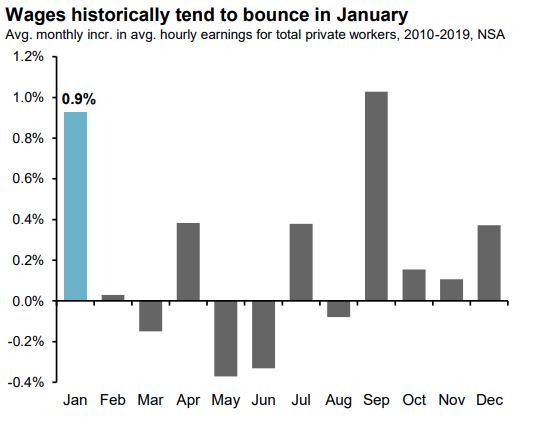