This chart shows that Americans not only consume more, but we also produce more. The bottom line is that it's good to be part of western civilization. But it's especially good to be in the United States. 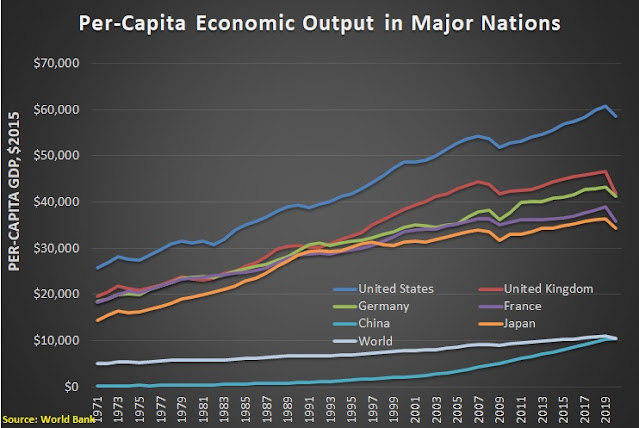 More than anything, it is the ingrained American entrepreneurial spirit and work ethic that separates us from Europe and the rest of the world.

...Europe, despite its wealth, its relatively stable institutions, its giant marketplace, and its intellectual firepower, is home to only one of the top 30 global Internet companies in the world (Spotify), while the United States is home to 18 of the top 30.

...One of the most underrated traits we hold, for instance, is our relative comfort with risk — a behavior embedded in the American character. ...Americans, self-selected risk-takers, created an individual and communal independence that engendered creativity.

...Because of a preoccupation with “inequality” — one shared by the modern American Left — European rules and taxation for stock-option remuneration make it difficult for start-up employees to enjoy the benefits of innovation — and make it harder for new companies to attract talent.

...But the deeper problem is that European culture values stability over success, security over invention...in Europe, hard work is less likely to guarantee results because policies that allow people to keep the fruits of their labor and compete matter far less.