How do elections affect the market?

Generally, empirical studies show that markets don't like uncertainty, and once the election results are in, that uncertainty is settled. Data show that the S&P 500 does well after the mid-term elections are decided.


A quick look at historical performance shows that stocks often see rough sledding in the September of years that feature midterm elections —and other years as well. For midterm years, analysts often chalk it up to uncertainty, since midterms typically see the incumbent president’s party lose seats. That same look at historical performance shows that stocks tend to do just fine as Election Day nears and in the aftermath of the vote, regardless of the outcome, as uncertainty begins to fade.


It really doesn't matter who wins the elections, just that the elections are over and the uncertainty is resolved. The following data shows that, since 1930, the market is up 90 percent of the time over the following 12 months. 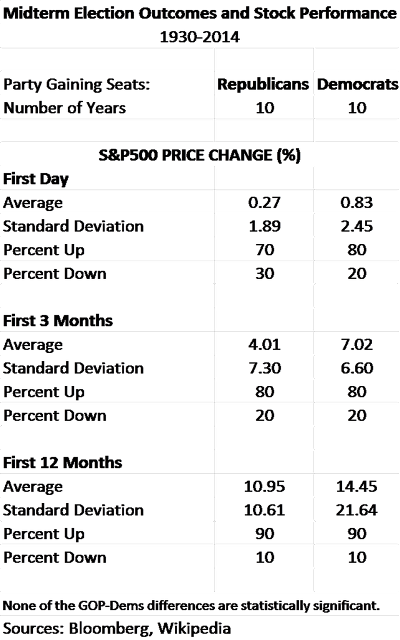 I wouldn't speculate on this. But having said that, I've moved funds out of money markets and will probably add to my equity holdings next week.