How Much Do You Pay In Cell Phone Taxes?

A typical American household with four wireless phones paying $100 per month for taxable wireless service can expect to pay about $260 per year in taxes, fees, and surcharges–up from $229 in 2018.


Nationally, these impositions make up about 21.7 percent of the average customer’s bill–the highest rate ever. Illinois has the highest wireless taxes in the country at 31.2 percent, followed by Washington at 28.8 percent, Nebraska at 28.1 percent, New York at 27.7 percent, and Utah at 25.6 percent.

Since 2008, average monthly wireless service bills per subscriber have dropped from just under $50 per line per month to $37.85 per month–a 24 percent reduction. However, wireless taxes have increased from 15.1 percent to 21.7 percent of the average bill–a 44 percent increase.

Most of the increase in the wireless tax burden is due to a very large (36 percent) increase in the Federal Universal Service Fund “contribution rate.” Wireless carriers are required to pay this surcharge on all charges for interstate telephone service.

At the end of 2018, more than 67 percent of low-income adults had only wireless for their phone service, and 57 percent of all adults were wireless only. Excessive taxes and fees, especially the very high per-line charges like those imposed in Chicago and Baltimore, impose a disproportionate burden on low-income consumers. In Chicago, taxes on a family with four lines of taxable wireless service paying $100 per month are more than $500 per year–about 43 percent of the bill. 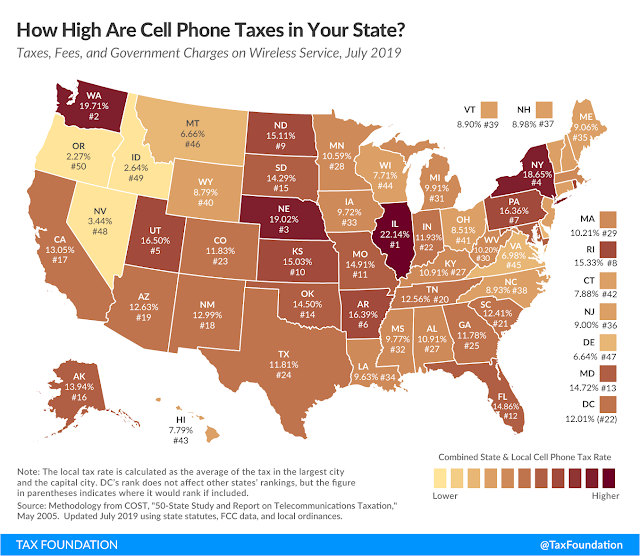