The current economic conditions index fell to 67.2 from 68.2 in February. That is a 1-point decrease for the month and leaves the index with a 47.6-point drop since February 2020. 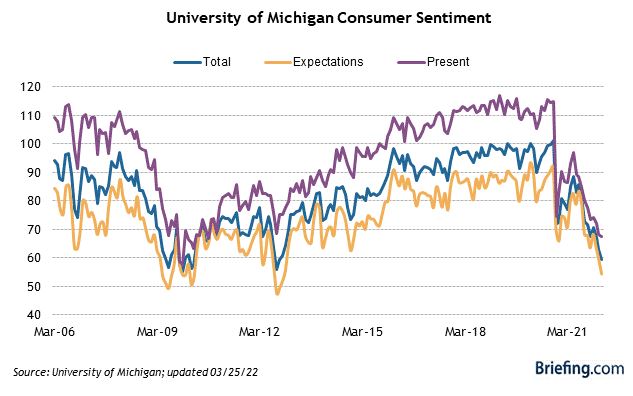 According to the report, “Consumer Sentiment remained largely unchanged in late March at the same diminished level recorded at mid month. Inflation has been the primary cause of rising pessimism, with an expected year-ahead inflation rate at 5.4%, the highest since November 1981. Inflation was mentioned throughout the survey, whether the questions referred to personal finances, prospects for the economy, or assessments of buying conditions.”
One positive note in the survey was continued favorable views of the labor market. According to the report, “The sole area of the economy about which consumers were still optimistic was the strong job market. Consumers anticipated in March that during the year ahead it was more likely that the unemployment rate would post further declines than increases (30% versus 24%).”

The substantial declines in consumer sentiment reflect the impact of higher consumer prices. The surge in prices for many consumer goods and services is largely a function of shortages of materials, a tight labor market, and logistical issues that prevent supply from meeting demand, and has been compounded by surging energy prices as a result of the Russian invasion of Ukraine.